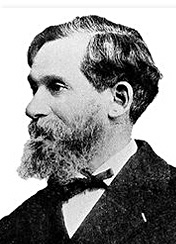 Georges Fabre ( – ) was a French forestry engineer, now best known for his role in creation of the ''Forêt Domaniale de l'Aigoual'' (Aigoual State Forest) and the weather observatory atop Mont Aigoual.

Fabre was born in Orléans, studied at the ''École polytechnique'' and the French National School of Forestry in Nancy, from which he graduated in 1868. From 1868-1875 he served as Guard General of Water and Forests in Dijon, then in Mende, after which he was named sub-inspector, then inspector, at Alès. As Gard's reforestation director until 1900, his major achievement was the development of the ''Forêt Domaniale de l'Aigoual'' and establishment of the meteorological observatory on its summit. In 1900 he was appointed curator of Forestry in Nîmes, which post he held until his retirement in 1909.

Today the ''Forêt Domaniale de l'Aigoual'' extends across about 15,000 hectares, of which 11,000 are in Gard and the remainder in Lozère.

Provided by Wikipedia
Search Tools: Get RSS Feed — Email this Search — Save Search